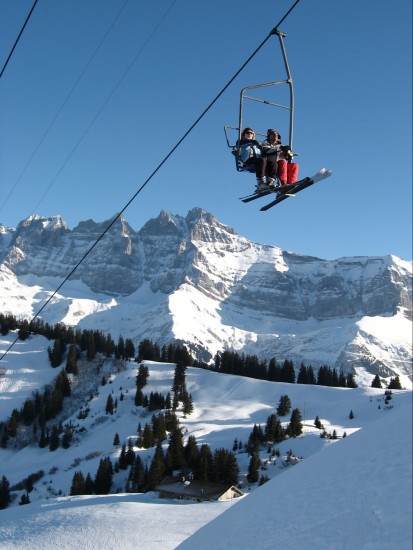 In an historic meeting held last Monday evening ( 1st March)  voters of the four communes Monthey, Troistorrents-Morgins,Val-d’Illiez and Champéry all agreed to support the new “planification” for the Swiss side of the Portes du Soleil. The plan is to invest almost a 100 million francs over the next 15 years to significantly improve the lift systems and pistes of Morgins, Champoussin and Les Croset. After two previous failed attempts in 2007 and 2008 to get a new plan agreed, this is a major step forward for everyone involved in the Portes Du Soleil .

Reading reports it was a very nervous time leading up to the final vote as there were still  campaigners pushing against the changes and tension between the communes was high. Some local farmers are unhappy with the proposed compensation scheme. However the final results were pretty conclusive with Champéry voting 198 yes, 45 no,Val-d’Illiez 350 yes, 93 no and  Troistorrents 244 yes, 9 no. The presence of the recently crowned Olympic champion Didier Defago at the  Troistorrents  meeting added weight to the “yes” vote when he addressed the audience encouraging everyone to “move on “

The plan aims to replace  many of the existing lifts with new chairs  taking out many of the T Bars . In  Morgins they will  replace the Foilleuse chair and  all the T Bars and current La Chaux chair in the bowl with 2 new chairs. There will also be a new piste back to Morgins  under the Foilleuse

The 2006 plan has been adapted with  new lifts and a change in pistes too . This has also been controversial and probably still has some way to go before being finally agreed. There is now talk about a “merger” between the local lifts companies in order to help the transition.